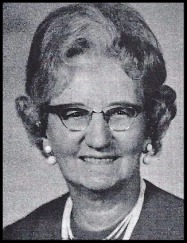 The following is a copy of a speech from index cards, that Gladys Perras (state president 1969-1970) had given. Not sure the date, but there is mention of 36 scholarships at the time of the speech. That places the date of the speech around 1976.

Home Bureau began in the year 1900 when Dean Bailey brought to the College of Agriculture in Ithaca, Miss Martha Van Rensselaer. She came to organize a reading course for farmers wives. Her office was located in the basement of Morrill Hall consisting of a kitchen table and a chair. This was the beginning of Home Economics education at Cornell University.

Dr. Ruby Green Smith had organized urban Home Economics Extension work in other states from Washington during the first world war. She entered New York State in Extension work in 1918 when she was called to Cornell by the State leader of County Agriculture, H. E. Babcock, to do for farm and city women, what was being done for farmers.

At this time State and Federal war emergency funds were financing urban and rural Home Demonstration work in 38 counties and 10 cities, including New York. These war-time funds were to expire June 30, 1919. New York’s share of Federal funds, were inadequate in Home Economics to meet the clamor of homemakers for continuing Home Demonstration work. It was evident there had to be something done for survival.

In November 1918, H.E. Babcock, State Food Commissioner and state leader of County Agricultural Agents, as well as Ruby Green Smith, proposed reorganization that would make home economics coordinate in rank and in name with agriculture. The plan appealed to Martha Van Rensselaer and Flora Rose co-heads of the Department of Home Economics in Cornell State College, and also to Florence Freer, state leader of the Home Demonstration Agents.

During World War I the name of Home Bureau had been used when homemakers in the largest cities were organized for emergency service, sponsored by the United States Department of Agriculture in cooperation with the Food Department.

Since Home Bureaus combined with Farm Bureaus, it was proposed that New York’s County Farm Buraus be asked if they would be willing to change their name to County Farm and Home Bureaus.

Professor Mann, Dean of Agriculture (Cornell), Professor Burritt, Director of Extension (Cornell), and Professor H.E. Babcock, State Leader of County Agriculture Agents all agreed that homes are the goals of farming, and that Home Economics should be given coordinate rank with agriculture and extension work of state colleges.

Many questions were asked. 1. Would Farm Bureaus be willing to change their names? 2. How many women would want to continue? 3. Would they be willing to develop a membership organization? 4. Could they get public appropriations from counties for adult education?

The women who were identified with Cornell’s war-time extension service of Home Economics in twenty-five counties and the cities of Syracuse, Buffalo, and Rochester all agreed, and the answer was yes! The next problem was financial. 30,000 New York State Homemakers had taken to Home Bureau organization like ducks to water.

A delegation of Home Bureau leaders accompanied with Ruby Green Smith, attended county hearings granted by the supervisors. Some were rather difficult to convince, but one by one the counties appropriations were granted and Home Bureaus were a reality throughout the State. With the aid of Farm Bureaus, and on the basis of the experience of the State College of Agriculture in teaching both Agriculture and Home Economics, Home Bureaus were organized after the Armistice in 1918. Mrs. Carrie Bridgen was the first President elected in March 1919, also a State Board of Directors was elected. The first state meeting was held at this time. During this same year Ruby Green Smith wrote the creed which is still being used at all off official meetings.

Home Demonstration Agents were placed in the counties to carry on the work with much help from Cornell University planning the programs and doing research for the many projects. The important ones were Crafts, Consumer Education, Scholarship, Health & Safety, International Relations, Legislation and Community Service.

A number of women deeply interested in the purpose and aims of Home Bureau were determined to carry on. It was a hard task and was accomplished by personal contact.

Home Bureau is a private independent organization supported solely by membership dues. It has access to no other funds. Home Bureau was organized in Clinton County in the year 1936 at a special meeting held in the Grange Hall, West Chazy. Mrs. Francis Flanagan was elected County Chairman, an office she capably held for several years.

Work began immediately to organize chapters but not without much planning, hard work and problems. There was difficulty in persuading the (town) supervisors that Home Bureau would be good for Clinton County, but with the persistent efforts of the late Mr. Ralph Sanger, they were convinced and moneys were appropriated. A full-time agent was secured, Prudence Wright.

Beekmantown and Plattsburgh were the first chapters to be organized. Many more followed and Home Bureau was off in a grand way. A well-planned program became a reality. The story of Home Bureau goes on and on. We have a unique organization now, supported only by membership dues. We have 36 scholarships in colleges throughout the state each one $5000. Our legislative program gives us many privileges we should use more diligently. Crafts are always popular, to name a few. Now don’t you agree Home Bureau is the finest?